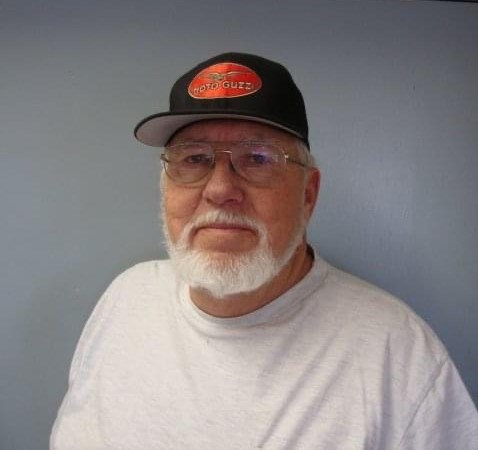 He was the son of George O. and Daisy (Baker) Harper.

On March 17, 1958, Mike joined the United States Navy and proudly served his country until March 16, 1962. Most of his time in the Navy, Mike served with the Military Police.

On March 18, 1961, Mike was united in marriage with Alice Faye Reeder in Oroville, California. After Mike’s honorable discharge from the Navy, Mike and Alice moved back to Missouri, living in Independence for a short while before moving to Raytown, Missouri. Mike and Alice lived in Raytown, Missouri until 1985 when they moved to their home in Greenwood, Missouri.

Mike’s lifelong dream was to own a motorcycle shop and in 1970 he realized that dream by starting the family motorcycle business, first opening Raytown Cycle Center, then becoming the founder, owner and operator of Harper’s Moto Guzzi, which has been in business for 52 years and still operating today.

Mike enjoyed traveling to motorcycle shows across the country. He also collected antique motorcycles and liked to do anything mechanical that had to do with their restoration. Mike was an avid animal lover. Over the years he rescued everything from dogs, birds, even coyotes if need be.

Mike was preceded in death by his parents, George O. and Daisy Harper and one sister, Mary Alice Sellers.

He is survived by his wife, Alice F. Harper of the home; two sons, Jason Lee Harper of Holt, Florida and Curtis Dean Harper and wife Sherri of Blue Springs, Missouri; three grandchildren, Kala Harper, Cory Harper and Taylor Harper; two great-grandchildren, Raina and Sophia, other relatives and many friends.

Per Mike’s wishes, cremation has been accorded. The family of Michael Allen “Mike” Harper will receive friends on Wednesday, July 27, 2022 from 5:30 – 7:00 p.m. at the Wallace Funeral Home, 422 N. Lake Street, Pleasant Hill, Missouri. A Memorial Service will follow visitation at 7:00 p.m. with Mr. Curtis Harper officiating. Full Military Honors will be conducted by the United States Navy and V.F.W Post #3118 Honor Guard of Pleasant Hill, Missouri immediately following the Memorial Service at the funeral home. Inurnment will be in the Missouri Veterans Cemetery at Higginsville, Missouri at a later date.

The Family suggests contributions to an animal rescue group or sanctuary of your choice, “In Memory of Michael Allen Harper”.